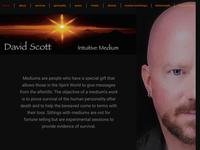 Mediums are people who have a special gift that allows those in the Spirit World to give messages from the afterlife. The objective of a medium’s work is to prove survival of the human personality after death and to help the bereaved come to terms with their loss. Sittings with mediums are not for fortune telling but are experimental sessions to provide evidence of survival. There are many ways that the medium receives messages: either by hearing (clairaudience), seeing (clairvoyance) or feeling (clairesentience). These are the methods that David uses to communicate with spirit to deliver messages to you.

"I guess that I would have to say that my experience with 'knowing' certain things began when I was a child. I remember being able to totally entertain myself without friends or playmates. That’s because my playmates were sometimes those of the 'unseen'. I can clearly remember hearing voices, anticipating phone calls and knowing what song was going to be next on the radio. I even remember 'seeing people' in my bedroom as a child in the middle of the night. However, I was not frightened. Being brought up in a conservative Midwestern town and my entire family being embedded in their conservative Christian faith, I dare not talk about what I experienced and never acted on my ability for it was considered evil.

It wasn’t until 2002 when I began 'soul searching' and exploring my personal spiritual path that I was able to determine what being a 'medium' was all about. I began doing a lot of meditation and energy work and this seemed to open the door to my long dormant ability. I remember the first time it happened. I was sitting with a friend in his apartment talking and all of sudden his deceased grandmother began communicating with me. I threw out the messages I was getting and my friend was able to validate what I was saying. It was then that I determined that this was a very special honor that was bestowed upon me.

"My mediumship is very much a ministry. A ministry to assist those in gaining clarity and insight as they embark on their own spiritual quest and understanding. I strive to make personal connections and give attention to those that are destined to receive messages. Not only do I minister to others but I also endeavor to be an "ambassador" for spirit and communicate on their behalf. However, mediumship is not just about demonstrating and giving messages. It’s about my daily walk with spirit. I strive to sit in this energy daily and build a relationship of trust, service and understanding with them. I have strong ethical beliefs and I am dedicated to using my gifts with wisdom and compassion."

David has been ministering to others as an intuitive medium since 2008. He has made a commitment that he would like to use this wonderful yet fragile universal gift to work with people more and on different levels.He feels drawn to teach others with mediumship ability as well how to use their gifts. In 2011, he launched his first mediumship workshop "The 5 C's of Mediumistic Discovery." David is also currently facilitating a monthly mediumship development circle at numerous locations throughout the DFW metroplex and in 2013 he launched his beginner's workshop, "Mediumship - Taking Your First Steps". David has appeared on several radio talk shows and television news and in December, 2014 he made an appearance on the paranormal reality television series “The Dead Files Revisited” on the Travel Channel where he assisted with a follow up investigation.

David is also a Certified Reiki practitioner through the International Center for Reiki Training and uses spiritual healing in his work. He is also alumni of the Arthur Findlay College located in the United Kingdom where he has completed multiple courses in evidential mediumship as well as beginning his studies in trance mediumship. The Arthur Findlay College is the world's foremost college for the advancement of Spiritualism and the Psychic Sciences. David is also being encouraged by his tutors to work towards earning a certificate (CSNU) in Speaking and Demonstrating with the Spiritualist's National Union in the UK and has enrolled in this program. In 2016 he completed a spiritual education and earned a Ministerial Bachelor's Degree in Parapsychology at the American Institute of Holistic Theology. He will now seek ordination as a Minister by completing the ordination program with the American Interfaith Holistic Temple.