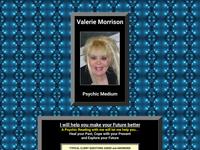 Valerie Morrison - Psychic Medium provides Psychic Readings by phone or at her office to her many clients that also include many Stars & Celebrities. As a regular guest on Radio & Television with appearances with Maury Povich, Court TV's Hit Show "Psychic Detectives" and others to name a few, Valerie currently can be heard on Radio Station WVLT 92.1 FM. May your Future bring to you all the Joy your Heart can hold and...

Valerie's phone is kept busy with clients calling to make appointments from every City and State in the USA and Internationally from the rest of the World.

Valerie was recently featured with an episode on Court TV's Hit Show "Psychic Detectives" that can be watched here: http://dai.ly/x54daof

Additionally Valerie can also be heard on her Talk Radio Show where you may call in with your "One Free Question" about your concerns. The Link to listen to the Radio Show from your Computer, Laptop or Mobile Phone and the Special Call In Phone Number can be found here: https://www.valeriemorrison.com/radio.html

Valerie has received many awards some of which are:

* The “Liberty Bell Award”
Philadelphia’s most prestigious award usually only presented to dignitaries such as Nelson Mandela, Etc. Valerie was given this award from the Mayor of Philadelphia for her prediction that the Mayor confirmed to have saved his life. This award was most recently presented to Pope Francis at the Vatican by our recent Mayor.

* The "Operation Enduring Freedom Award"
Presented to Valerie Morrison in appreciation for her support of our Troops stationed
at the Trident Headquarters, in Parwan, Afghanistan by way of her long distance Counseling to our Troops by Telephone.

* The "Presidential Award"
Valerie received a telephone call from the Armed Forces Inaugural Committee. They had seen her on the television show "People are Talking" hosted by Maury Povich and liked her psychic accuracy.

They asked Valerie if she could help with a weather forecast for Ronald Reagan's upcoming Presidential Inauguration Parade and in return would give her a seat close to the president.

Valerie told them to cancel it, that it would be much too cold that day. With Valerie's Psychic influence, they cancelled the parade.

The temperature the day of the cancelled parade was -2 degrees below zero.

This was the first and only Presidential Inauguration Parade ever cancelled in the history of the United States.

Valerie was presented this award in Washington, DC on the "Panorama" Television Show - Hosted by Maury Povich where the surprise guests, a Captain and a Lieutenant from the United States Army Inaugural Committee proclaimed that Valerie's weather forecast proved to be...

"more accurate than their forecast from the United States Weather Service"

In response to this prediction Valerie was contacted by Nancy Reagan and became her Personal Psychic and later predicted the unsuccessful assassination attempt on her husband President Ronald Reagan.

Valerie’s psychic abilities and psychic predictions, together with her over 40 years of counseling experience brings to you guidance for your concerns about your Relationships, Children, Health Issues, Finances, Legal Issues, Relocating, Business Decisions and of course your Living & Departed Family Members and Loved Ones.

Valerie’s hope is that her advice, observations, and her psychic perception about you and your loved ones will make Peace and Happiness always the greatest part of your life.