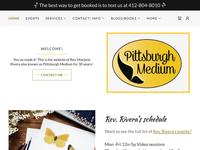 Rev. Marjorie Rivera Kain is a modern oracle, a professional Psychic Medium who offers not only readings and advice, but poignant timely counseling for all matters in your life. Find clarity, direction and your path with the help of a true seer.

Marjorie Augustine Rivera brings a refreshing, compassionate and thought provoking perspective to the world of psychic phenomena. As a psychic medium, teacher and lecturer, she has helped thousands with her ability to predict future events and communicate with those who have crossed over into the Spirit side of life.

Marjorie has captivated clients with her honesty and her unique abilities to connect with people and with their loved ones who have passed into Spirit. Deeply compassionate, often uncannily accurate and occasionally humorous, Marjorie’s down-to-earth approach has earned her a vast and loyal following.

Marjorie's talents are not limited to Spirit communication, as she is amazingly accurate with her ability to decipher relationship connections, career forecasts and every imaginable question on the future of each sitter's life.

Born in Panama, Marjorie is a Cuna Indian. The Cunas are the Indigenous peoples of the San Blas Islands off the Pacific Coast of Panama. Marjorie was born into a family of healers, shaman and medicine women. Her life as a Latin American woman was infused with a strong belief and respect for the Spirit World. She began to see and communicate with spirits when she was 5.

Marjorie's pursuits eventually took her to Lily Dale, NY where she attended seminary school and became ordained as a Spiritualist Minister. Many Spiritualists are also Mediums like Marjorie. She has welcomed the many changes living a spiritual life has brought to her, and has allowed herself to evolve into the woman she is today. Medium, Healer, Artist, Minister, Teacher, Student.

Marjorie resides in Pittsburgh, Pennsylvania with her husband Sam, her poodle Kaipo and her Devon Rex cat Elvis.

Degrees
Marjorie is a certified Psychic and Medium. Marjorie is an ordained Spiritualist Minister and Metaphysician. Marjorie holds a Doctorate in Divinity awarded in honor from the Universal Life Monastery. Marjorie is a graduate of The Fellowships of the Spirit Seminary in Lily Dale, NY. Marjorie has a professional affiliation with the OPDR network, the Online Psychic and Divination Readers Network for professional online ethics. Marjorie has been teaching mediumship as well as leading spiritual development circles in her community since 2000.

This being my first real sit down with a medium, I was skeptical, but open to what would happen during my session with Marjorie. Right off the bat, she started acknowledging a person I was closely involved with. From describing his appearance, to his personality, and even the way he departed this world, everything she shared with me was right on the money! I found Marjorie to be very gifted. I would definitely recommend her, and I look forward to scheduling another session with her.
posted on April 3, 2016 by Cyndi Copeland