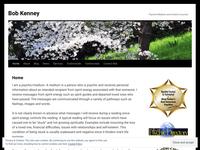 I became spiritually aware shortly after my mother died in 1987. I began to smell flowers in my car in January. From there I kept sensing spirits in a variety of ways. Then I began to actually perceive information from spirit by way of words, feelings and imagery. They told me that I was to serve The Supreme Being or God and that I would later in life “awaken” to a life of service. I should always stay humble and that they would teach me over time what I needed to know.

I was then led to someone who taught me the basics of spiritualism and validated that what I perceived was real. My psychic side simply became another aspect of reality. Soon, I got used to observing and communicating with spirits. I was a bit surprised by the number of spirits I was coming into contact with, but I soon realized that they knew that I could see and hear them, so they purposefully came to me.

I began to do readings for people who were sent to me, but kept a low profile at first even though I was very confident in the reality of what I was doing. I was a scientist at the time, so I really felt apprehensive about my peers learning about this part of me. Then in the summer of 2006, I learned that I had a very advanced stage of cancer. I did have a choice to pass into spirit, but I knew I had to survive to help others. I trusted my fate to The Supreme Being and was assured that I would survive despite hearing dire news. Once I made this commitment, I made a very quick recovery and was completely free of cancer. I also was fortunate to have been led to an excellent oncologist! I am now ready to share my gift with a broader audience and to embrace this commitment to The Supreme Being. I fully recognize the importance of this work. I always meditate with The Supreme Being and my guides to ensure that I am doing the right thing.