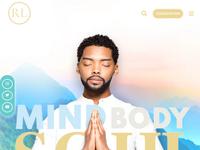 Reginald Lewis The Soul Teacher is an internationally acclaimed expert intuitive, psychic medium, conscious channel, visionary, mystic, soul coach and healer. Known for his compassion, sincerity, integrity, a high degree of accuracy, insight, and wisdom, Reginald has become a personal consultant and advisor for many celebrities and has been a regularly featured guest on the daytime talk show “STEVE.” He has also been featured on VH1, BET, Vibe, WE tv, Billboard, and many other popular entertainment sites, publications, blogs, and hosted his own online radio talk show, “Enlightenment for Your Soul.”

A natural-born seer, medium, and healer, Reginald became quite aware of his inner knowing of Truth at a very early age. Encountering supernatural and paranormal phenomena from the age of four and having a profound mystical experience at thirteen years old, he discovered he possessed spiritual gifts and talents and had a unique soul purpose and calling in his life to serve. Blessed with a sixth sense of the existence of other beings and other dimensions beyond the everyday reality inhabited by those around him, he started a regular meditation practice, honing his discernment and learning how to connect and communicate with his spiritual guides. As a teenager, Reginald’s psychic abilities continued to develop, and he began doing private readings in high school for classmates, friends, family members and soon after that, the public.

While attending the University of Akron and Kent State University, Reginald began to use his abilities in the field of psychic detective work, assisting law enforcement in missing persons and cold cases, paranormal investigations, private consultations, group readings, platform demonstrations as well as facilitating hands-on and distant healing sessions.
As an avid student of philosophy, psychology, theology and the healing arts, Reginald has a bachelor’s degree in Metaphysical Science from the University of Sedona and is ordained as a minister under the International Metaphysical Ministry (IMM). He is also a member of the IMM Counseling Psychology Association and is a trained and certified healer in the Japanese traditional Usui Reiki System of Natural Healing. He has studied Integrative Medicine and Chinese Medical Qigong at Case Western Reserve University School of Medicine. Currently, Reginald is a doctoral candidate at the University of Metaphysics.

Serving as a catalyst between the physical and the spirit world, Reginald’s clientele ranges from high-profile figures, celebrities to CEOs, healthcare professionals, psychologists, law enforcement officers, investors, homemakers, college students and people from all walks of life and religious backgrounds all over the world.

Reginald’s mission is to use his God-given gifts to inspire, educate, and empower people, helping humanity to evolve through his work with individuals, the masses, and the media. His commitment is to the expansion of consciousness, spiritual enlightenment, personal and planetary healing.

With over 10 years of experience in the psychic, metaphysical and spiritual fields, Reginald Lewis is among the youngest and most inspiring psychics and spiritual mediums of this generation. The host of his own online radio talk show, Enlightenment for Your Soul, he has also been featured on CBS and ParaX among other radio shows and nationally syndicated programs.

Having developed strong precognitive and clairvoyant abilities from as early as five years old, Reginald has always had an awareness of the existence of deceased loved ones, spirit guides, guardian angels, and other higher spiritual beings and dimensions beyond our everyday physical reality.

He has conducted thousands of private readings and consultations. His clientele range from CEOs, doctors, nurses, chiropractors, psychologists, law enforcement officers, investors, actors, artists, homemakers, college students and people from all walks of life, all over the world. Reginald is even known as the “Psychics’ Psychic” or ‘Healers’ Healer” and has worked with many other psychics, mediums, healers and spiritual teachers remotely in the United States, South and Central America, Europe, Asia, Africa, Australia and the Middle East.

Reginald’s mission is to use his God-given gifts to inspire, educate and empower people, helping humanity to evolve through his work with individuals, the masses and media. His commitment is to the expansion of consciousness, spiritual enlightenment and healing on our planet.