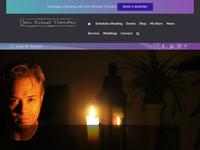 John Michael Thornton is a psychic and medical intuitive with over thirty years experience honing his natural abilities.

Trained at the Natural Psychic School of Metaphysics to connect directly with Spirit, he channels guidance on health, spirituality, relationships, and life paths in a calm and compassionate manner.

John Michael is vibrant teacher who has taught at Great Conjunction Spiritual Center, the Association for Research and Enlightenment, Victory of Light, Lily Dale Assembly, and spiritual groups across the Northeast.

I am here to help you along your path, not to lead you down mine.

John Michael Thornton is a psychic, medical intuitive and teacher. For thirty years he has been giving readings, teaching and helping people find a healthy connection to their own psychic abilities and the divine. In 2008 John became a full-time psychic, teacher and writer.

Raised in a metaphysical family he was influenced by the work of Edgar Cayce, Ron Roth, and Ray Stanford.

In 1992 John Michael began is practice when he was ordained and graduated from Linda Schiller-Hanna’s Natural Psychic School of Metaphysics. He studied Religion and Philosophy at Youngstown State University, receiving a BA in 1998, followed by an internship at the A.R.E. (Association for Research and Enlightenment) in 1999.

John Michael is an E-RYT yoga teacher and has been teaching yoga since 2004 - bringing together the spiritual and the physical practice for his students.

John Michael has worked and taught for the A.R.E.; lectured for the LilyDale Assembly, Church of the Living Spirit, Universal Light Expo; and taught small groups and gatherings across the country.

His classes have been featured at metaphysical shops and centers including Midnight Moon, Karen’s Wellness Center and the Sacred Garden. His radio appearances include Great Conjunction on Paramania Radio, WHOT’s AC and Kelly in the Morning, ParaX Radio’s The Psychic Nextdoor, WREO’s Psychic Thursday and WDOE’s Morning Show. You can hear clips in the Multimedia Area of his website.

John Michael is a featured lecturer for the Holistic Highway to Wisdom DVD Series with “This I Choose - Ethics and Morality of the Modern Mystic” in 2009 and “Answering the Plea, ‘Do it for Me’ ” in 2010 - Available from hh2w.com

John Michael's workbook Grounding, Forgiveness & Gratitude and companion cd as well as his guided meditation - Walking the Sacred Stair are available on Amazon.

John Michael Thornton resides in Youngstown, Ohio with his husband Joe, three dogs, one cat and a rapidly expanding garden... it may be a bit out of control.