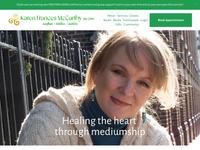 Using the immense power of mediumship to heal the heart, certified Irish medium and best-selling author, Karen Frances McCarthy CSNU, strives to provide comfort in your time of need. She blends the Celtic mysticism of her upbringing with the loving kindness of her Buddhist practice to bring messages of joy, healing, and support from your loved ones in spirit form. She also offers healing mediumship and soul readings to restore harmony and well-being to your body, mind. and spirit. An advocate of the ethical practice and healing potential of mediumship, Karen underwent years of intensive training at the world-renowned Arthur Findlay College in England and holds three awards, Certificates of Recognition, in mediumship, spiritual healing and public speaking from its governing body, the Spiritualist National Union. She is currently a PhD candidate and her latest book "Till Death Don't Us Part" (White Crow Books 2020) has been a #1 Hot New Release and Amazon international best-seller since it's publication in 2020.

Karen is passionate about writing for mindfulness and spiritual transformation. Her new book, Till Death Don't Us Part: A True Story of Awakening to Love After Life (White Crow Books, 2020) is a true and transformational story of a former journalist's extraordinary journey from skepticism, through tragedy, to awakening to the knowledge that her dead fiancé is communicating from the hereafter. Described as "a gripping modern love story that transcends all boundaries," by Academy Award Nominee, Juanita Wilson, both the paperback and the audiobook were listed as a #1 Hot New Release on Amazon and both are currently Amazon Best Sellers. The book has been featured in Forbes, The Irish Times, and Psychic News, and on New Thinking Allowed with Jeffrey Mishlove, New Realities TV with Alan Steinfeld, the Seek Reality with Roberta Grimes, and Psychic Matters with Ann Theato podcasts.

In television, she has written and produced documentaries, including producing Alchemy and The Crystal Cave with Deepak Chopra.

She continues to write feature articles for The Irish Times, Irish Voice, OmTimes, Salon, HuffPost Religion, and Beliefnet, among other publications. Her first book, The Other Irish, was supported by Ireland's Department of Foreign Affairs as a cultural outreach effort in Ireland's cross-border peace process. It received considerable media attention and resulted in her being named one of the top Irish female broadcasters who have made an international impact.

Karen has a keen interest in metaphysics, physics, and consciousness theory and hosted the Science and Spiritualism initiative for the SNU international school online, which included speakers such as Dr Dean Radin and Prof Chris Roe. She teaches at the Arthur Conan Doyle Centre, the Edgar Cayce Center, Montclair Psychic School, and One Spirit Learning Alliance. She also offers many talks and classes with the Global Afterlife Group in Australia. She is currently a PhD candidate, studying postsecular ghost literature, at the prestigious Russell Group University of Birmingham in the UK.

Karen is passionate about giving voice to those in spirit to bring messages of joy, upliftment and healing to loved ones still here in physical form. She is an advocate for palliative and afterlife education and how we can maintain relationships with those in spirit form in a healthy way. To help those dealing with the complexities of grief she studied bereavement counseling from the Institute of Counselling in Scotland. She also offers spiritual guidance and healing mediumship to empower you to resolve physical, mental, or emotional issues, regain harmony, and manifest the life you desire.