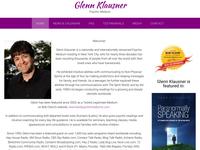 Glenn Klausner has been featured since 2002 as a Tested Legitimate Medium on Bob Olson's website, www.bestpsychicmediums.com.

Glenn offers hour and half hour readings by telephone, Skype, and Zoom.

Hosted The Glenn Klausner Hour & The Spirit Side Of Life from 2006-2011 on ContactTalkRadio.com

The Morning Rave on The End, 107.9
Sacramento, California

Visits From Heaven by Josie Varga
A New Pair Of Socks by Marianne Weaver
An Engineer's Guide to the Spirit World by John Roncz
Paranormally SPEAKING: My Search for Evidence of Life After Death
by Dawn Dickenson
Messages from Sam by Beverly Holliday