Rates neatly listed on website www.imstillhere.net or by calling his office. 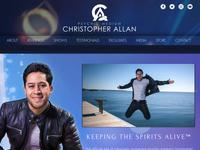 Christopher Allan is 'Keeping The Spirits Alive' and continuing the integrity of afterlife communication for a new generation. He has gained the respect of fellow mediums & the countless families he has helped for the past 12 years. As "resident medium" to the Maury Show, Christopher has helped solve cold cases & help bereaved parents find closure to the most tragic of scenarios. Nominated 'Best Psychic' by the Long Island Press, Christopher's unique gift was nationally featured on MTV's True Life "I Have Paranormal Ability". As the recipient of the "Giver Of Hope" award by the American Cancer Society, Christopher Allan conducts his readings with integrity, compassion, and humility. He is a member of The Forever Family Foundation, an organization committed to prove the existence of life after death through science & research. In 2016 he received congressional recognition for his numerous charitable services. As former host of his own radio show on New York's Party 105, he is evolving from the airwaves to streaming media with his new show "Keeping The Spirits ALIVE!" - that premiered in 2019, as a groundbreaking interactive show on Facebook Live that puts him in front of a live studio audience every month.
Christopher Allan is able to give clear & specific validations from the spirit world which has made him a premiere must-see medium. At his live events, his humor & quick wit not only entertains but helps demystify this somewhat controversial work to help people understand that their loved ones are more accessible than they think, even to those who aren't naturally gifted as Christopher is.
Communicating with deceased loved one's isn't Christopher's only talent. He is an accomplished singer/songwriter. Christopher channels healing & inspiration through his musical gifts. He believes his passion for both music & mediumship are interconnected to help heal people on many levels.
Christopher Allan has gained the respect of support groups (Compassionate Friends, COPE Foundation), charities (Make A Wish Foundation, Ronald McDonald House), and organizations alike, giving people insight into the world beyond. His annual Making Spirits Bright Toy Drive brings in thousands of dollars worth of new toys and allows him to donate them to several children's hospitals each year.
The closure Christopher Allan is able to give someone is remarkable. Being able to give people a sense of peace & move forward is the focus of his work. His events often have a charitable cause attached. He conducts his private readings to his extensive clientele in his office in Hauppauge, located in the heart of Long Island.

+Private or Group sessions available via in person or skype/phone
+Christopher has worked with many charities and organizations such as:- National MS Society, Events & Adventures, One.org, National Cancer Society, various 9/11 support groups.

HOW IT ALL BEGAN
Like his gift, Christopher Allan's story is unique. Born in Bogota Columbia, he was an orphan like so many children in the poverty stricken capital of South America. But, when a well deserving family from New York-- who struggled to conceive children of their own, saw a picture of this child who needed a home, they immediately sensed a connection. Within weeks, Christopher was adopted and could live a life full of love and full of family.
Growing up, Christopher was an extremely sensitive child. Though cliché', he encountered many events that he learned later on, could be defined as psychic experiences. He always knew what he would get for Christmas' and birthdays --something he thought everyone could do. He questioned why people ever used wrapping paper.
Christopher would often stay at his grandparent's house in Babylon, NY while both parents worked day jobs. It was in this house; Christopher recalls feeling like there were more than just his grandparents living there. He began hearing voices telling stories about his family. Christopher thought he would get in trouble if he shared these stories at first. They were about people from the past that always seem to make the family cry.
As a young boy, Christopher became attached to his grandmother, whom he shared an unspoken bond with. "She had a rough life growing up and accredited her intuition for guiding her through those hardships. This is one of the many gifts my grandmother gave me." Christopher explains.
It's these strong family values he was raised on that are the driving force behind his work as a psychic today. rn But what makes Christopher Allan stand out above the rest is that he knows, first hand, how it feels like to never say goodbye.
In the winter of 1996, that same grandmother would suffer a massive stroke only to fall into a coma soon after. The family didn't allow young Christopher to visit her hospital room. She would die the day after Christmas. Not being able to say a fond farewell only added to his pain.
Soon after, Christopher claims his grandmother visited him in his sleep. "She looked 20 years younger, but still who I knew to be my Grandma. With a smile, she let me know to tell the family 'I'm still here'. And that I was to make sure I do so because as I got older, it would be my job to say those words to others." Though unclear at the time, it doesn't take much to see that Christopher has lived up to his grandmother's words.
Christopher has made it a priority to give people closure through his readings. With his stunningly specific messages, many claim it's as if they are having one last conversation with their loved one. Christopher Allan has showed us that there is no such thing as goodbye. In turn, this gives closure to Christopher and his own family.

Christopher Allan is a must see. He read my family & had us laughing and crying. Our mom said she had a huge weight off her shoulders after Christopher connected us with my uncle. He stayed longer than was booked so everybody had a chance to be read! Super nice. Super genuine. I've been to several mediums/psychics before and looking back, I believe he was the most relatable & gave the most amount of correct information & "validations".
posted on January 16, 2015 by Lindsay Scalini
I was so excited I couldn't sleep the night before. Christopher Allan met all my expectations, although I suppose you shouldn't have expectations going to a medium. I couldn't help it though! He connected with my deceased mom and told me her name, how she passed and things only I would know. Was blown away! Very helpful & comforting experience. Highly suggest people go to him if your serious about getting a reading! A+++
posted on January 15, 2015 by Jessica Turner
Christopher Allan gave me the most accurate & mind blowing reading of my life! I say mind blowing because he was a normal looking, down to earth person, but when he spoke and shared with me what he picked up, my mouth hit the floor & in 1 hour, he changed the way I looked at death...life! Christopher's very gifted, talented, and warm hearted. He put me at ease and showed me my brothers spirit is still a part of mine. Forever. Highly recommend!
posted on January 13, 2015 by Ashley Lawrence
Christopher Allan gave the most deepest, insightful, & accurate reading to me and my brother. We gave his office different first names & called with a friends cell phone. Needless to say, he turned these skeptics into true believers. He didn't cold read or ask questions, he was head & shoulders the most impressive medium my family has been to. Very grateful & would highly recommend.
posted on August 4, 2014 by Barbera Collins
I had my first reading with Christopher 2 days ago, to put it short, I was blown away. Not only was he on point with every word said,but he was so empathetic and personable. Such a sweet person with such an amazing gift. He also read my boyfriend and sister and they too, were blown away. I recommend him to anyone who would like to get in touch with their loved ones on the other side. Christopher changed my life and outlook on mediums! Such an amazing breathtaking person!!!!!!!!!!
posted on February 2, 2013 by Jessica Guzman
I had several readings with Chris. I was more than pleased with each reading. He was accurate, giving specific details that no one would have known. Moreso, he was friendly and personable, which added to the overall experience. I have seen (in person) mediums who have established a bigger name, yet I was more impressed by Chris. He def has a gift and I would (and have) highly recommend him to others. Great experience overall for myself and anyone else who has had a reading with him.
posted on July 14, 2012 by April Hobert
I think Chris is an amazing person. His thoughtfulness for other people coupled with his talent is an inspiration to all of us. He is someone who appreciates family values and can help us find comfort knowing that our loved ones are still very present in our lives. I thank him for showing me how to look for the signs.
posted on January 17, 2010 by Mary Ferrato