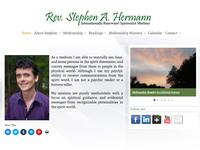 The Reverend Stephen Hermann is an internationally acclaimed medium with incredible talent. Through his highly detailed and accurate mediumship, Stephen is able to provide first hand proof that life after death exists, by specific messages containing names, dates and places only known to the individual receiving the reading. A featured personality on radio and television worldwide, Stephen's extraordinary mediumship has been documented by the Associated Press and other news media. A former research medium for the University of Virginia, Stephen's evidential mediumship is the subject of a best selling book published in Macedonia. His rapid fire, no nonsense, extremely precise delivery of spirit messages has established him as one of the world's leading mediums.

Stephen has studied and practiced mediumship for over 30 years and holds credentials as an ordained minister, teacher and certified medium with the National Spiritualist Association of Churches. He is founder and director of the New England Center for Parapsychology in Greenfield, Massachusetts. Stephen conducts training programs for mediumship and healing development internationally. He is available for private sessions in person or by phone as well as group seances and home gatherings.

Steve is one of the most genuine and sincere mediums I have ever had the opportunity to work with. His connection to spirit is absolute, supportive and amazing. I could not have imagined a more evidentual and authentic reading. He is a lovely person and a treasure.
posted on March 21, 2013 by Lori Marshall
This guy is amazing! We did a family session with him and he completely validated what we thought we already knew.
posted on December 8, 2012 by Bonnie Gibney
Today, I was very fortunate to have a reading with Steve. He is a very gifted medium - his evidence was accurate, detailed and conveyed with compassion and I am very grateful for the new insights I now have. Sharon Johnson
posted on March 7, 2012 by sharon johnson
steve convinced me that my mother was still alive and watching over me. I have been to a few and they were ok, but asked too many questions. steve didn't fish for information and some of the things that he said even I didn't know at the time of the reading. I owe him my life for he turned things around completely for me. thank you so much steve for bringing through my mother and letting me know beyond a shadow of a doubt that she is still living and not in pain anymore.
posted on October 25, 2011 by kate darling
The session that I had with Steve was incredible. He brought my father through by full name(first and last) My father passed over 43 years ago and of the many mediums I have consulted in the past 30 years, Steve was the first to bring him through. I highly recommend Steve as he is professional and extremely accurate. He helped my family out greatly.
posted on October 24, 2007 by Julie Clark