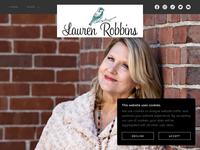 As seen on Married at First Sight TV Show, Episode 14, The Lady of the Dunes 2022 Documentary, The List TV Show, CBS, Fox News, and More * Lauren (Bortolami) Robbins is an Award-Winning Tested & Endorsed Psychic Medium, Afterlife Medium, Author, Healer, Spiritual Teacher, and a Catholic who has read for celebrities including Mark Maher (Mark the Shark) on Married at First Sight. She has earned over 400+ written reviews by clients and continues to be named as one of the best and most accurate Psychic Mediums.

At the age of two, Lauren began seeing into the spiritual realm after developing permanent double vision and a lazy eye from a brief illness. After years of suppressing her gifts, she opened her first practice in 2007 as a Reiki Master/Teacher and Spiritual Healer to help others with pain, trauma, and loss after losing her father and going through a traumatic divorce. Lauren began receiving evidential psychic, medium, and angelic messages for clients during their Reiki sessions and sought advice from her family priest if she was doing the right thing by providing these messages. After listening to her stories of saving many individuals who were suicidal or who asked for a sign from God and then met Lauren, her priest told her "Not all mediums work for God, but you do", she was able to embrace her God-given gifts.