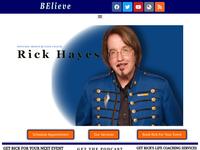 2013 and 2014 Psychic Medium of the Year - Paranormal Association Awards

Rick Hayes is the founder of LifesGift, Inc. – an association that supports his consultation and speaking engagement services. As a psychic medium and life consultant with unique abilities, Rick consults on a daily basis with those that have questions on life and the life-after.

As a speaker and lecturer, Rick has shared his unique insight with inspiration and enthusiasm to thousands since 2003. Rick’s speaking invitations range from a small organization group to major events and conventions attended by thousands. Rick’s wide range of topics is designed to accommodate each speaking invitation.

THE Psychic Medium from SYFY’s ‘The Possessed’

I just recently had a session with Rick and once again he managed to help me BElieve! I have known Rick since 2013 and he helped me cope with the loss of my son in 2016 and Big Brother 2020. My Son came in all proud that he helped his Uncle Fred when he got there! Rick is the REAL DEAL! After your session is over you sit and think theres no way he could of known that! He makes you feel so comfortable and he is a great guy! I wish I could hang out with him, he makes you feel special!
posted on January 25, 2021 by Sherri Osborne
I had a reading from Rick on Sunday 4/30/17. he said my brother, who I do not communicate with, would be contacting me & I should acknowledge it. Less than 24 hours later, there is a card left at my door from my brother with plants from aGreat Uncles house. Something he would never share before. Thanks Rick, unsure where to go with this but wanted to provide a validation of what you said. BX4MT
posted on May 1, 2017 by Beth VanCleave
Our visit with Rick was AWESOME !! He was nothing like the other Mediums we have been to . His connection with our loved was THERE !! NO DOUBT !!! Thank you so much Rick for the visit with our Son Mark . I knew he would like you ❤️ Oh and of course My Mom . And others . Your time with us was PRICELESS !!! Thank you again . I will be seeing where you go and we will see you again . Pamela Murray
posted on July 8, 2016 by Pamela Murray
I have been to 2 events of Rick Hayes. I have witnessed in amazement of how Rick describes some events in which there was no possible way he could have known. Rick Hayes is the real deal. He is open and honest. has a good sense of humor . Rick is a down to earth person. Looking forward to seeing him again.
posted on May 10, 2013 by bonnie miller
Have known Rick for about 6yrs. He has guilded me with so many things. Brought me comfort, insight and the strength to become the person that i have become. He's honest, compassionate and real. He's at the top of the game. A truly amazing man, that shares his gift with all he can.
posted on May 10, 2013 by Vickie Craig