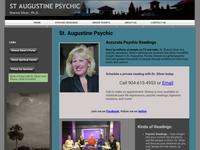 She was born in London, England, and moved to the U.S. when she was 15. She received her Ph.D. in Metaphysical Philosophy, has written a book, "A Voice from Heaven," and has appeared numerous times on national TV and radio. She currently lives in St. Augustine, Florida, where she lectures and still offers readings by phone.

Dr. Sheree Silver appeared on the hit ABC reality show Wife Swap twice. She has been seen around the world as viewers saw her help the other families deal with difficulties in their lives. Her second appearance on Wife Swap was a result of viewer votes -- hers and another family were the ones chosen from everyone else ever to have appeared on Wife Swap to re-swap with each other on the show's big 100th episode that aired in March 2009. In this episode, Silver takes the swapped husband through a past life regression, and in the end, he proclaims her the "real thing".

As a result of these shows, Dr. Silver is recognized everywhere, and her requests for psychic readings and dream analysis have been catapulted to high gear.

This woman is AMAZING!! My husband and I went to Sheree hoping he would be able to connect with his mother. We were anxious and didn't know what to expect but we are in awe of Sheree's gift! She was extremely accurate and explained things very well. We will always be thankful to her and will never forget that reading. We have been struggling for 3 years to have a child and she told us we have a boy waiting for us! You WILL NOT regret it if you see Sheree Silver!! THANK YOU SO MUCH SHEREE!!!
posted on February 27, 2016 by Shealyn Engberg