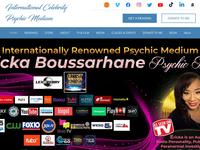 International Celebrity Psychic Medium Ericka Boussarhane has helped countless people with relationships, career, family, health, finance, dreams, & more. She is able to connect with loved ones and pets on the other side.

I give amazingly, accurate, and detailed psychic readings. They are delivered with honesty, integrity, compassion, good vibes, magic, gold glitter, and psychic love!

Ericka Marcia Boussarhane is an author, radio personality, public speaker, and professional psychic medium who is sought after around the world. She has been featured on television programs dealing with the paranormal and interviewed by national radio stations across the country.

BIO:
She sees and talks to dead people. The other side shares amazing stories of love, healing, and life beyond the grave.

International Psychic Medium Ericka Boussarhhane is highly respected for her amazing abilities to communicate with loved ones from the other side. Ericka has helped countless people with issues in relationships, grief, career, family, health, finance, death, crime, business, and more. She uses her mediumship, clairvoyance, clairaudience, clairsentience, clairscent, clairtangency, and clairgustance to help others find closure and insight into their lives. As a generational psychic, Ericka uses no divination tool for her readings. She has been featured on television programs dealing with the paranormal and interviewed by national radio stations across the country. She also has been profiled on television shows featuring psychics that solve crimes and bring closure to families after death.
​
She spent most of her life working in psychology and business. She later went on to open two child care facilities. She founded one of the first African American female-owned comic conventions in the US, Pensacola Comic Convention. The multi genres convention covers science fiction, horror, fantasy, gaming, anime, costuming, indie films, artists, celebrities, comics, Renaissance, cosplay, steampunk, theater, performing, literature, publishing, arts, mystery, collecting, model construction, film making, and paranormal.
Pensacola Comic Con
https://en.wikipedia.org/wiki/Pensacola_Comic_Convention
​
Ericka is a serial entrepreneur and philanthropist. Ericka is also a gifted teacher and has taught many individuals how to tap into their own psychic nature. She believes that we all have undeveloped psychic abilities and talents and that with the proper teaching we can harness and strengthen them. She owns several websites that help others with their holistic, psychic, metaphysical, and educational goals.

She teaches and lectures on the following topics:

Ericka is available for public and private events as well as speaking engagements across North America and Canada. For more information about Ericka Boussarhane, you can visit her website at www.coldcasepsychic.com

Ericka was so spot on and specific with things. It was truly life changing for me. She helped me see I was making the right decision with a relationship I was in. She is the real deal, no doubt.
posted on July 3, 2018 by Erin Sloane
I attended a group meeting last night, I went to support a friend who wanted a message from the other side. I did not feel the need for myself and had no specific questions ready for Erica. Not because I dont believe, but because I have been involved in psychic phenomenon all my life and am very comfortable with where I am now. Surprisingly Erica came to me with messages from beyond which were 100% accurate about my life past and present.This has renewed my interest. Thank you Erica.
posted on May 13, 2012 by Joanna Rogers
Erica did a reading for me this last weekend and she was right on with her answers. The whole room was captivated by her readings and I think we all left with a feeling of satisfaction. She is truely gifted and also very personable. She made my skeptic husband a believer!
posted on March 15, 2010 by Julie Edwards
Erica is extremely accurate. Her answers which I have had the chance to confirme are 100% true. The answers which I have not confirmed yet, I can say without doubt that they will also be 100% correct. She is simply dazzling.
posted on December 9, 2008 by Munazza Mohammad
Ericka is extremely gifted and has truly made me a believer!
posted on July 31, 2008 by Hillary Anaya
Ericka is one of the most caring and accurate psychic readers I have come across in many years. It is a pleasure to know her!
posted on May 2, 2008 by Debra Greene