Fees are $75 and up. Please see website link below for full services/contact pricing page. 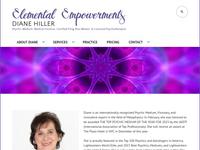 Diane is noted as one of the most well researched Evidential Psychic Mediums in North America and widely recognized as among the very best in her field both in America and Internationally. As a natural born Psychic, trained BTB Feng Shui Master (tm), Licensed Psychotherapist, and Medical Intuitive she has been tested as highly accurate. She is fast and very detailed. Being directly connected to spiritual guides, Diane does not need cards or tools to tune in on your concerns. It is Diane's honor and privilege to be here to read for you and she looks forward to your call.

TOP EVIDENTIAL MEDIUM — Diane Hiller is noted as one of the most well researched Evidential Psychic Mediums in North America. And she's widely recognized as among the best in her field internationally.

NATURAL BORN PSYCHIC, TESTED AS ACCURATE, FAST & DETAILED — As a natural born Psychic and Medical Intuitive, Diane has been tested as highly accurate. Being directly connected to spiritual guides, Diane does not need cards or tools to tune in on your concerns, which helps her to be fast and detailed.

DIANE SEES, HEARS, KNOWS & FEELS — Diane is a psychic medium and empath with the gifts of Clairvoyance (to see), Clairaudiance (to hear), Claircognizance (to know) and Clairsentience (to feel).

HIGH HONORS, AWARDS & CERTIFICATIONS — Diane is featured in 2014 edition of "The Top 100 Psychics and Astrologers in America." She was ranked in 2014-2105 and 2015-2016 by popular vote as among the top ten in 4 categories world wide (Psychic, Medium, Life Coach, and Feng Shui Master) by The American Federation of Certified Psychics and Mediums.

FEATURED GUEST — Diane has also been featured on CBS New Sky Radio, interviewed with All Women's Radio Network Heart Radio, and was additionally featured in 2012 as one of 26 Top mediums word wide in the first ever "World Visionary Summit.”

CONTRIBUTING AUTHOR — Diane is a 4 time best selling contributing author on energy and spirit. More information is available at her website:
http://www.elementalempowerments.com

Her educational background offers a deep understanding and compassion for your life challenges and her psychic gifts the ability to predict their outcome.

Although Diane’s intuitive and psychic gifts were evident at age 9 through direct contact with the spirit world as well as through precognitive dreams of upcoming world events, it was not until her first spiritual opening at the age of 40 that she embarked on an intensive study of both Eastern and Western Philosophy. Her interests and studies have been ongoing and broad and have included, Vipassana meditation, yogic breath work, shamanic journey work, past life regressions, Native American traditions and rituals, Chinese Astrology, the I Ching and Feng Shui.

Feeling captured by the philosophy of Tibetan Buddhism, she pursued formal study and holds a 3-year accredited degree from the BTB Feng Shui Professional Training Program, formed at the request of His Holiness Professor Lin Yun, a distinguished philosopher and world authority on Feng Shui. She has trained under some of the most renowned teachers in this field.

Following her second and most powerful kundalini awakening, in which she was connected to her root deity, The Green Tara, she began to work more intensively under a shamanic practitioner. While undergoing her own spiritual journey, Diane opened more fully to her gifts of mediumship and was introduced to her primary guide whom she knows by name as Carolyn. In addition, Diane receives ongoing messages and guidance from a departed and very deep soul connection named Patti. She has provided thousands of readings to people from all walks of life.

Please Note: I do not provide or allow recordings of any therapy, coaching, or mediumship readings.

Diane lives in Litchfield, Connecticut and is the Founder of Elemental Empowerments, LLC.