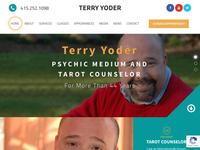 Terry Yoder is an internationally known clairvoyant medium and tarot card counselor. He opened to his multiple gifts in a near death experience in 1979. Since the beginning of his practice in 1984, Terry has been of help and service to thousands of clients spanning the globe. Terry travels frequently throughout the U.S. to work with groups of clients, conduct spirit gatherings, speaking engagements, and to participate in holistic and metaphysical expositions. Terry has hosted and been hosted on numerous radio and television programs.

Blessed with the gifts of emotional empathy, keen intuition, and grounded centeredness, Terry is passionate about sharing his gifts and talents to provide supportive and transformative sessions for his clients. Terry utilizes the tarot to help illuminate the source of personal challenges, aiding clients in obtaining personal insights and clearing of pathways to the realization and manifestation of one's true desires.

Clients find sessions with Terry to bring light, increased sense of well-being, personal transformation, and improved quality of life. Terry is tremendously caring and compassionate for his clients. His consultations are provided in a safe, non-judgmental environment and have often been reported as life changing.

In March 2016 I filmed my first solo interview. I have added the link for this film above. The film is titled: "FROM THE OTHER SIDE."
It is a brief 37-minute look at my life and gifts as a clairvoyant medium and my individual experience working with spirit to help others. I hope you enjoy it and find it informative.

In July 2014 I participated in another filmed interview, my first, for a documentary about Near Death Experiences and clairvoyant abilities, entitled "BEYOND OUR SIGHT." The film was released in September 2014 and is available on YouTube as well. You may find this film by doing a YouTube search for: "BEYOND OUR SIGHT." I hope you will take the time to see the film as well. It too is beautifully done.

I have known Terry for many years. He is a gifted psychic. Recently I had asked spirit for a sign, to give me some guidance in my life. A few hours later, most unexpectedly, I received an email from Terry. In the email Terry stated that he had just received a powerful message from spirit to deliver to me. Wow, I was blown away. Every word that Terry conveyed resonated with me deeply. I am most thankful to Terry and the connection he has with spirit. No dial up here!
posted on August 22, 2015 by Richard Hutton
This video is really amazing and inspirational. Terry is great clairvoyant.. I am waiting for his prediction to channel true on my self and my children. I am learning to be positive and Terry has helped me through his reading and counseling.
posted on May 12, 2015 by Henny Suarly
VERY impressive. The insight and information that he made available to me was right on target. I will be back!! Thank you Terry!
posted on May 10, 2014 by Cathy Kebert