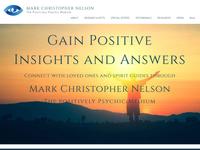 Mark is a featured psychic medium at the 2019 Soul Summit Scottsdale, and was featured at the 2017 and 2018 AREI Afterlife Symposiums. He has appeared on ABC's 20/20, SyFy's Ghost Adventures and Paranormal Witness, and Ghost Hunters, and Haunted History. He also won the psychic competition on the FoxTV's "Most Gifted" You can watch the video at https://www.marknelsonmedium.com/. He currently co-hosts, Grave Misunderstandings," a podcast available on multiple platforms, and is taping a new pilot.

Since, he was a child, Mark has seen spirits. The first was his father, who was tragically killed in a holdup. He appeared to Mark to tell him that he was alive in spirit, and asked his son to relay a message of love to his mother.

However, it wasn’t until he was an adult, that Mark embraced his skills as a medium and psychic. It wasn’t until Mark says he was ready, that his Dad began to provide messages for his seven brothers and sisters. This led him to finally begin reading for clients.

Today, Mark works as a psychic medium for clients that call from China, Canada, Mexico, Europe, and all across the USA. When he reads, he sees events unfold like movies, hears names and voices, and gets messages from family, friends and spiritual guides on the other side. The details validate that ‘it’s really them’ and that the messages are real. These communications include deeply personal insights, and loving guidance.

Mark also has the ability of psychometry, which enables him to hold an object and read for the owner, or whomever used it. During psychometry presentations, audience members leave personal affects such as jewelry, eyeglasses or keys on a table. Without seeing who left the objects, Mark picks them up and does blind readings for the owners. Clients will also occasionally mail objects to Mark, with a self-addressed stamped envelope, for their reading.

Mark lives in Los Angeles with his wife, Barbara and their dog Kitzel.