Only offers readings at events 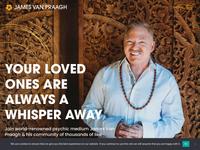 TESTED AS LEGITIMATE BY BOB OLSON - Listed on BestPsychicMediums.com. James Van Praagh's natural, easy-going style would lead you to believe that he is chatting with a friend on the telephone, not communicating messages from the grave. James is a survival evidence medium, meaning that he is able to bridge the gap between two planes of existence, that of the living and that of the dead, by providing evidential proof of life after death via detailed messages.

"I'm clairsentient," explains James Van Praagh, "which simply means clear feeling. I feel the emotions and personalities of the deceased. I am also clairvoyant," he adds, clarifying that, "the first is feeling, the second is seeing, very much like Whoopi Goldberg in the movie, Ghost." The true essence of the messages are the feelings behind the words.

James Van Praagh is an expert on this subject, since he has been in touch with those feelings most of his adult life. "The spirits communicate by their emotions. No words exist in the English language, or any other for that matter, which can describe the intense sensations."

Personality traits come in as well. If a person was talkative while alive, he will come through with plenty to say. James Van Praagh also relays physical traits and death conditions as evidence. "If I convey recognizable evidence along with even a fraction of the loving energy behind the message, I consider the reading successful."

James Van Praagh's public popularity began during his appearances on the NBC talk show "The Other Side." The show concentrated on paranormal issues, and James became the favorite guest and resident expert on the subject of life after death. Even Howard Rosenberg, the Los Angeles Times distinguished television critic, dubbed James "spectacular".

Through the years his message of hope has touched a great many more people due to his television appearances on such shows as Oprah, Larry King Live, Dr. Phil, A&E Biography, Maury Povich, 20/20, and 48 Hours. His unique paranormal experiences during the past twenty-five years have seen him author best-selling books, create meditation programs and development videos, teach mediumship classes, conduct seminars to sold-out audiences, and produce successful television projects.

James Van Praagh was born in Bayside, New York, and is the youngest of four children. An average child, he remembers having a tremendous fascination with death. He was raised Catholic and served as an altar boy, entering the seminary at the age of fourteen. It was there that his interest in Catholicism ended and his sense of spirituality began. There are no schools or training that could prepare James for his unusual vocation. Indeed, his ability to communicate with the dead arose out of his…well…life. This belief was affirmed by an astonishing encounter that he had when he was only 8-years-old. The young boy was praying for God to reveal Himself to him, when an open hand appeared through the ceiling of James Van Praagh's room emitting radiant beams of light. Incredibly, he recounts, "I wasn't scared. It was actually very peaceful."

Graduating from public high school, James Van Praagh continued to pursue his studies and later graduated from San Francisco State University with a degree in Broadcasting and Communications. You could say that he ended up working in Communications, just in a different capacity. After graduation, he moved to Los Angeles where he became involved in metaphysics and psychic phenomena. At 24, the promise of that outstretched palm so many years before was fulfilled.

James Van Praagh's unique paranormal experiences during the past twenty-five years have been recorded in his best-selling books Talking To Heaven, Reaching To Heaven, and Healing Grief. His fourth book is the proclaimed Heaven and Earth - Making the Psychic Connection. In September 2003, teens were introduced to Looking Beyond: A Teen's Guide to the Spiritual World. In November of that same year his book Meditations with James Van Praagh brought a new awareness to the meditation experience. His book, Ghosts Among Us, was released to critical acclaim in May 2008 and quickly landed on the New York Times Bestseller list and #1 on Amazon.com Bestseller list. And his latest book is titled Growing Up In Heaven: The Eternal Connection Between Parent And Child.

James Van Praagh shared his extraordinary gift on television with a daytime talk show of his own entitled Beyond With James Van Praagh. The show aired in the U.S. from September 2002 through September 2003 and is still showing in syndication in Europe, Australia and South America.

In April 2002, James Van Praagh began an ongoing relationship with the CBS network and produced an incredibly successful mini-series Living With The Dead, inspired by his first book Talking To Heaven. This mini-series starred Ted Danson and Mary Steenburgen and was the highest rated show for CBS in two years. In October 2004 his second successful CBS project aired entitled The Dead Will Tell starring Anne Heche.

Currently James Van Praagh is Co-Executive Producing his first CBS primetime series Ghost Whisperer starring Jennifer Love Hewitt. This show premiered in September 2005 and has become the #1 Friday night drama for CBS. It began its third season in September 2007. It is currently seen in over 200 markets worldwide.

To assist others in spiritual awareness, James travels the world teaching mediumship development classes, hosting spiritual cruises, and conducting sold-out seminars. He takes pride in having built a web site that encourages spiritual learning, grief support and friendships through its many online communities, resources and activities.

"The books, CDs, seminars, classes, web site and television projects are ways to share my abilities and the message that our personalities do indeed survive death. My greatest satisfaction in doing this work is witnessing an instantaneous change in people," states James about his work.

"When someone is alone and overwhelmed by grief, life seems over. But, when I'm able to help teach someone to make contact with a loved one, their grief and loneliness disappears and proper closure can take place."

And so…"When a bright smile overcomes tears, it becomes a smile that can light up the world!"

***Go to http://www.AfterlifeTV.com for Video Interviews with James Van Praagh

First, I would like to say thank you so much James for contacting my parents. I have never had a reading that had so many things on point. The personalities of my parents were spot on. I felt comfortable because there was no question in my mind that my parents were communicating with you. I fell like my parents were also comfortable with you. They shared so much of our life and their love for each other. The end message my mother had, how she thanked everyone, was so her. Thank you
posted on June 6, 2020 by Janine Heusinger
James is a great psychic. I know psychics can't be right about everything but James dose his best. I would love for him to help me figure out my path in life:):)
posted on January 31, 2015 by Angela Baker
I have seen James on TV many times and have been fascinated with his readings. There is a kind of tranquility about James that just seems to quite my soul and know that he is gifted through God. I would like nothing more at this time of my life to be able to speak with James and bring some peace into my life. Sincerely, Joan A. Woody
posted on June 15, 2013 by Joan Woody