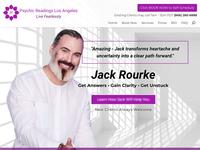 Jack Rourke is one of the most prominent working psychics in North America today. He is the author of the best-selling book The Rational Psychic™, A Skeptic's Guide to Extraordinary Perception as well as the forthcoming Beyond Psychic™, A Rational Guide to Extraordinary Being. His expert opinion is found within the book Kids Who See Ghosts by Dr. Caron Goode. And, Jack is a featured teacher in the book What Wags the World, Tales of Conscious Awakening by Miriam Knight & Julie Clayton.

Dubbed "world renowned" by AOL’S celebrity news, Jack Rourke is a skilled and compassionate professional offering superior psychic service to individuals, business and law enforcement. Jack earned the title "world renowned" because of his work on criminal and missing person’s cases, the fact his predictions and commentary have been distributed globally by the Associated Press, Fox, NBC and CNN, and because his psychic work and client base extends well beyond the continental United States to places as far away as Australia, Japan, South Africa and the former Soviet Union.

Jack is often referred to as the psychic's psychic. He is a skilled and compassionate professional offering a superior level of guidance and service to individuals, business and law enforcement. You will find when sharing a confidential concern with Jack that he cuts through the confusion inspiring a new level of awareness. Whether your concern is a practical matter such as the sale of a home, a business decision or a painful emotionally convoluted matter of the heart, the information Jack accesses is illuminating and empowering.

Jack's 2013 predictions were filmed for national television in November 2012 and then profiled on NBC again in early March of 2013 after successfully predicting the scandal of an Olympian accused of murder. Jack has shared the stage with famed medium Lisa Williams on the Ricki Lake show and provided annual predictions to the Associated Press going back to 2006. Examples of information on record accurately forecast in the AP interviews - which were both event and time specific are: In 2006 for 2007, a collision between a submarine and what Jack called a “Chinese oil tanker” off the coast of Africa which two months later turned out to be a collision between a Japanese super tanker and the American naval submarine the USS Newport News. And in 2007 for 2008: Mr. Rourke predicted the August 2008 invasion of the Republic of Georgia by Russian troops.